"Der Erlkönig" (eng.: Erlking, Alderking or Earlie-king (Aytoun and Martin)[1]) is arguably the most famous German ballad. Goethe describes a nightly ride on horseback. A father tries to reach his home, his feverish child in his arms. The story of the Erlkönig derives from the traditional Danish ballad Elveskud: Goethe's poem was inspired by Johann Gottfried Herder's translation of a variant of the ballad.[3] The poem was originally written by Goethe as part of a 1782 Singspiel, Die Fischerin (The [female] Fisher). It has been set to music many times. Best known is the version by Franz Schubert.[3]

The poem is not only gripping for its dire theme: a sick child who dies in the end, the sudden end a depiction of the emptiness and horror the father must feel. The son's and the father's view of the world occur at the same time which leaves the listener in doubt which level is real; the father's assurance that his sons' visions are just fantasies and cannot hurt him are arguably false.

The piece requires the singer to take more than one role. This frequently occurs in songs (Der Tod und das Mädchen, Das Heideröslein), but the dramatic exchange of the Alderking, the father, and the son still create a challenge for the performer.

There is also another aspect to the song: The Alderking is characterized as a reckless abuser. First, he tries to bribe the child, sweet-talking and acting as a child himself. He then raises his bid to golden fabrics and girls for a company (the Alderking's daughters). When this also fails, he admits his physical attraction and resorts to brute force.

"Der Erlkönig" is part of the following concert program: 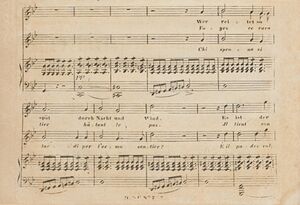 Retrieved from ‘https://jarousskywiki.com/index.php?title=Der_Erlkönig&oldid=9845’
Categories:
Cookies help us deliver our services. By using our services, you agree to our use of cookies.